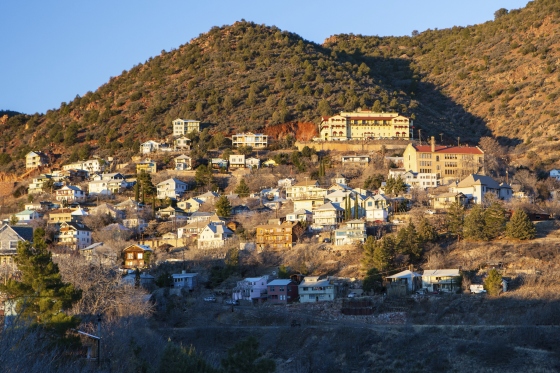 Known as the Wickedest City in the West, Jerome is home to what many consider to be one of the most haunted spots in the state. The Jerome Grand Hotel is housed in a former state hospital that opened in 1927 to treat mentally ill patients and local copper miners who suffered hideous injuries while plying their trade. The hospital closed in 1950 but reopened in the late 1990s as a hotel. Many visitors have reported poltergeist-like activity involved appliances coming unplugged and electronic equipment malfunctioning or mysteriously moved to difference locations. Add to that cries of distress and phantom nurses roaming the halls and you may find this a difficult place to get a good night’s sleep.

The Birdcage Theater in Tombstone is a former brothel, gambling parlor and saloon that now serves as a tourist attraction. Plenty of people have reported seeing the ghosts of dancers, gamblers and cowboys, which is understandable considering more than a dozen gunfights took place on the property before it closed in 1889. Many former employees claim to have seen and heard spooky things and some visitors claim the ghosts have even followed them home.

Old prisons are prime spots for paranormal activity and the Yuma Territorial Prison is no exception. The two most haunted locations on the grounds are said to be the visitors’ museum and an especially creepy spot known as the Dark Cell where prisoners were often confined for days on end. Many visitors who have crossed the threshold to take a closer look report feeling anxious and some have even reported feeling a pinch or two. The spook within the Dark Cell is attracted to the color red and small children. Meanwhile, in the museum, employees claim to hear a woman singing in the early morning hours. The museum is also home to a poltergeist that plays with money and is particularly fond of dimes.

Go if you dare, but if you find yourself in any of these creepy landmarks, do not be surprised if you run into an otherworldly visitor or two.

Follow us for more articles on lifestyle, travel and recreation in the American Southwest